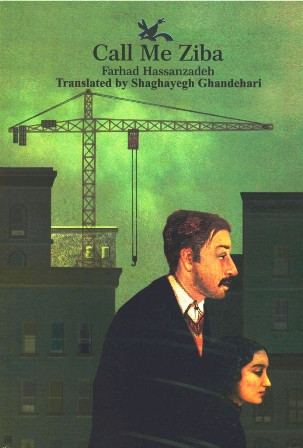 “Call Me Ziba” has made its way to the 2018 IBBY Honour List.  https://farhadhasanzadeh.com/wp-content/uploads/2017/07/call-me-ziba.jpg 303 448 فرهاد حسن‌زاده فرهاد حسن‌زاده //farhadhasanzadeh.com/wp-content/uploads/2017/10/back-6-e1527016375456.jpg 1396-06-29 1396-06-29
Among the three Iranian books selected for the prestigious list of honour for the International Board on Books for Young People, or IBBY, for 2018 is “Call Me Ziba” by Farhad Hasanzadeh which was published by the Institute for the Intellectual Development of Children and Young Adults (also known as Kanoon) in 2015.
The Award Committee of the Children’s Book Council of Iran (CBC) chose three books to represent Iran’s best recent works : “Call Me Ziba” written by Farhad Hasanzadeh (best book), Neil Gaiman’s “The Ocean at the End of The Lane,” translated by Farzad Farbod (best translation) and Seyyed Ali Shojai’s “Caution! Danger of Attack by Mice….and Others”” illustrated by Nazanin Abbasi (best illustration).
“Call Me Ziba” is about a girl named Ziba who lives in an orphanage for girls. Her father is confined to a mental asylum. On her birthday, her father calls and asks her to help him escape from the asylum so they can spend her birthday together and have a good time. Her father promises to make up for past wrongdoings. But things go wrong. The adventures that ensue are not quite in Ziba’s favour. They are the consequences of  past deeds.
This book has also previously been awarded best book at the Iranian Book Fair by the Institute for the Intellectual Development of Children and Young Adults and Children’s Book Council of Iran. In addition, it was previously nominated as best book for the Flying Turtle award, the Book of the Year award and the Children with Special Needs (IBBY) award.
These three books will be honoured in an official ceremony as part of the 36th IBBY International Congress that will take place in Athens, Greece. It is an exceptional opportunity to present the best books of Iran to 77 other countries. More information can be obtained from
http://www.ibbycongressathens2018.com/