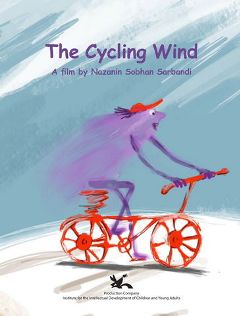 The most recent animation released by Institute for the Intellectual Development of Children and Young Adults, The Cycling Wind, Directed by Nazanin Sobhan Sarbandi has attended several international film festivals over a few months.

The Public Relations of the aforementioned institute reported that Sarbandi made up this six-minute screenplay upon a story in the book Gallop … Gallop … by Farhad Hassanzadeh, Kanoon Publications.

The plot is about a young wind who gets a bicycle with which it blows faster, freely travels everywhere enjoying the journey. Most important than all, it is the only cycling wind in the world and this new ability makes it capable of doing whatever it wants …

The storyboard, rail, setting and graphic of The Cycling Wind were all created by Nazanin Sobhan Sarbandi using a two-dimensional digital technique.